Public Clit Diddling: Can it truly be meditative? 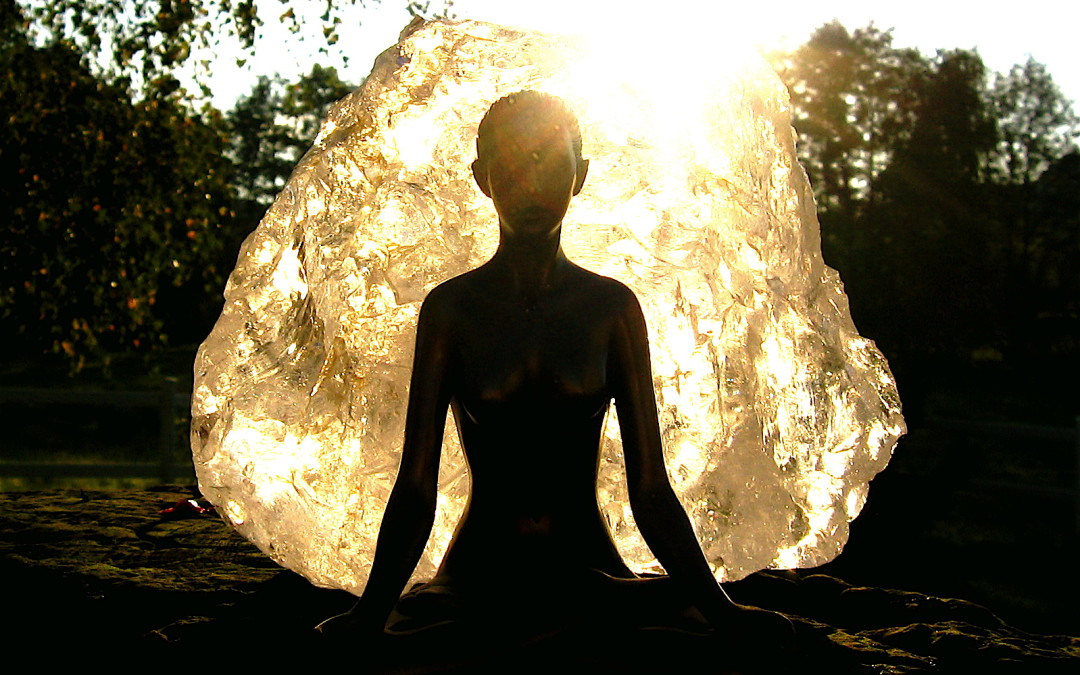 What is the secret to a reliable, quick orgasm? A number of websites will regale you with tips and tricks to ensure a climax every time, but only one organization, OneTaste will claim it as a possible side effect of their practice, Orgasmic Meditation.

I found out about OM from an adult film director, Irina of Creamy Coconut, who noticed that one of the women who performed in her films could always quickly climax and would often “squirt” (i.e. ejaculate) which is something very few women can do frequently. When asked what her secret was, the performer simply replied, “I OM.”

When pressed for more information, she explained that Orgasmic Meditation is the fine art of clit diddling where one person strokes another for 15 minutes according to a specific set of practices. Intrigued, Irina began attending OM sessions and turned me on to this rather public sexual act, so I decided I would do a bit of investigative reporting and sign up for one of their instructional seminars.

On a sunny Saturday, I pulled up to a “wellness center” in a nearby suburb of Boston for my first foray into public clit diddling. As I stepped into the sunlit, breezy room where instruction would occur, I heard a bubbling of friendly chatter. People wearing t-shirts with sayings such as “The Pussy Knows” hugged each other in greeting. It seemed like this was a crowd who knew each other; hugs were more common than hellos.

The group was a gender equal mix of middle age hippies with a fair smattering of twenty-somethings  and we fell into a hushed silence as two women came to the front and sat down. 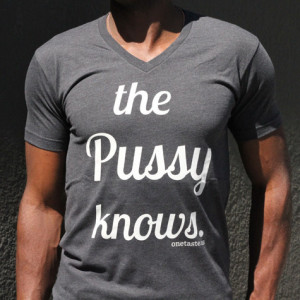 They both explained how OM had changed their lives and their words gave the impression that they had found what truly fulfilled them in life. While I can’t say that this practice is for everyone, it does seem like it could be the answer for those who are asking the right question.

The instructor, Liz, laid out two rules for the experience:

1) We should adhere to a system of Green, Yellow, and Red. Green is obvious. It’s easy and comfortable. Yellow is a space that is a bit more challenging and it is where we learn from and grow. It is where we should be. Red represents when things have gone too far.

2) We all need to take full responsibility for our actions. Specifically, we need to let someone know if we are in the red zone so that one of the group leaders can intervene.

Every step in the process of OMing is laid out meticulously. The first step is a question. “Would you like to OM?” If the answer is yes, then the stroker begins to set up a specifically laid out area in which the OM will occur, called a nest. Once the area is set up, the pair assume the stroking position where the woman is lying down with her legs spread. and the stroker is at her side.

The stroker alerts the strokee before making any physical contact and starts out with an open palm “grounding” which is a sort of tactile introduction that takes place on the legs. The stroker then begins to lightly stroke the upper left hand quadrant of the strokee’s clitoris because this is where the highest concentration of nerve endings are collected.

Slight changes in positioning and intensity are carried out through a specific language where value qualifiers, such as good and bad, are not used. The stroking continues for 15 minutes, and when the session is complete, the pair will share “frames” which are basically moments that each person noticed throughout.

While the main speaker described the practice I couldn’t help but notice that her stage companion sitting on a tall stool was very obviously going commando under her short purple dress. While this was initially distracting, we soon found out that she would be part of an OM demonstration where we would see a whole lot more than the “Brittney shot”.

During the OM, the instructor had us call out how we were feeling. The responses ranged from slightly poetic, “a staccato pulsing in my pussy,” to downright clueless, “like I need to fart.” We were definitely in the yellow zone.

After the demonstration, the instructor told us we were going to practice the first step in OMing: asking. We moved all of the chairs to the side of the room and what followed next resembled a strange re-mix of musical chairs, where whenever the music stopped, you would turn to the person nearest to you and one person would ask the other if they would like to OM. The asker would inquire repeatedly in a variety of ways during the next minute and would say thank you whether the response was a yes or no.

Following this exercise, it was time to get down to the nitty-gritty, and sadly, this was the moment when I had to step out. My boyfriend was unable to accompany me and he, understandably, wasn’t too keen on the idea of a stranger stroking my clit.

I did eventually OM with my boyfriend, but neither of us were really able to take it seriously enough to feel like it was meditation. Admittedly, the construction going on right outside our window did not help to invoke the proper atmosphere.

Though I was invited a few times, I never did take part in a communal OM session. It’s just not my thing, but luckily I was  able to get the inside scoop from Irina who had participated in a number of OM circles and had been practicing at home as well.”I feel like I just want to tell everyone to shut up and stop moaning in my ear!” she laughed when I first asked her what it was like to be stroked in a room full of strangers. But as she started to attend more sessions the experience became much more profound and complicated.

“When I first started to OM, I had the realization that I had never, or what felt like never, allowed someone to make me climax. I had always played with my own clit during sex and this was great, but at a certain point I realized that it would be so amazing to surrender to someone and let them make me come. So I started practicing more and started attracting more strokers who I was attracted to.

At first OMing was not nearly as exciting as the sexual activity I was used to, but I liked that it forced me to slow down and focus on every tiny sensation. Over time, I felt that it had become easier to ask for what I wanted because I was beginning to notice sensations in my body that I never had before. At some point, I realized that I was no longer bored. At some point, I almost came from a clothed stranger’s gloved finger lightly stroking my clit. 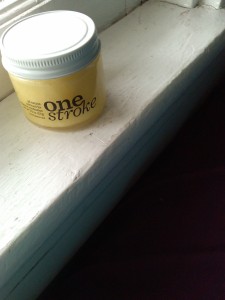 The official OM lube about to be put to use.

It isn’t quite about climax and it is definitely not based on reciprocation because everyone gets something different out of the session (like the time when my partner said that his injured shoulder felt a warmth and release from stroking me.)  Often, after OMing I would get into a sort of “beast” mode sexually, and so over all it seemed to be a really great force in my life, but everything has its two sides, doesn’t it?

They say that an OM starts with a question, and it’s true. I noticed that when certain people asked me to OM, I felt repulsed, invaded, and I didn’t think it was fair to them or me to have them keep asking and receiving a polite “no” every time. Plus, I didn’t want to feel the way I felt when they asked, so I kindly requested that a certain person who stirred up these unpleasant feelings not ask again, and clarified that I did not want to OM with him. Period. He didn’t tell me to eat shit, but he did get defensive and insult my command of the English language. Here’s where things get sticky. This guy goes to the OM circles, and I no longer felt comfortable spreading my naked pussy open if he or others similar were in the room.

So I asked the staff for help. In response, one of them asked me if I wanted a “hard stroke,” which means that he was about to say something that might be hurtful to me, or rather, hard to hear. He called me an “asshole for judging someone else’s desires,” but I didn’t feel that I was judging, just requesting that someone in a “safe space” refrain from making advances once I had made my preference clear. He then gave me some great exercises for self empowerment, among them being “only say yes when you are 100% sure that you want to say ‘yes.’” When I confronted him about not really addressing my issue, he didn’t respond at all. I then contacted two more members and they didn’t have a plan for me to feel safe either.

Maybe eventually someone will address these issues but I haven’t gone back. It’s been harder and harder to climax from what I normally do and I have noticed a particular sensitivity around the part of my clitoris that was focused on during OMing. I’ve met some pretty cool people at OM circles, but many of them agree that the practice feels “stunt vagina-esque,” especially their 7 hour “how to” class. OM is a business. I get that it must be sustainable, lord knows I get that, but some of the applicable practices left me feeling very pawn-like.

In the beginning, OM helped me deal with connection and over-stimulation issues. It brought up memories that were pertinent and repressed, and the community helped support my growth and self care. But at a certain point, I no longer felt nurtured. Now that I’ve left, I’ve been feeling like something is missing. Maybe it’s a recovery from a cult? Maybe it’s just that they are onto something but need to refine their practices. Maybe eventually it will work out. Who knows? In the meantime I have bigger fish to fry.”

The idea of Orgasmic Meditation is built on a bedrock of solid principles, pleasure and consent, but a strong foundation alone does not prevent issues from arising. Scientific evidence has shown the tangible benefits of meditating, and frequent sexual activity, so this practice does seem to have serious positive potential, but if it is to be carried out along the lines of a communal experience, then the comfort of the participants who are making themselves vulnerable in the process should be paramount. This will inevitably involve some tough decisions that the organization must make, the first of which would be holding everyone accountable for their actions. In a culture where men are taught to be persistent in the face of female rejection, it is inevitable that some people will not understand that no simply means no, and while the aforementioned is certainly a less threatening situation than others in which a “no” is ignored, the principle remains the same.

OM provides a framework for people to become more in touch with their desires but desire, is a delicate thing, and must be handled with care. While the communal experience may not always be the right fit, most women would benefit from a greater connection with their body, so if there is one take away from this rather complicated experience I would say it is simply to take time out of your day to connect with your body, whether it is with a partner, in a crowd or in the privacy of your own bedroom.