50 Shades of Grey: The Movie Review 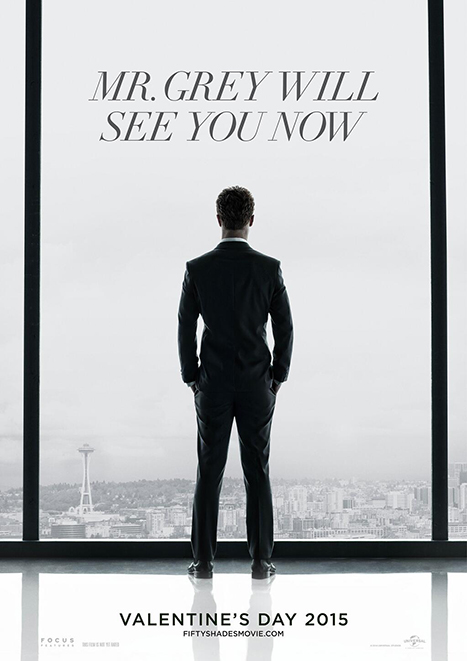 So, like millions of people around the world… I also got fucked by Christian and Anastasia.

The movie, just like the book, is the definition of “so bad, it’s kinda good”, but I’m ultimately glad I read it, and experienced it on the big screen.

So why do I care?

Second, I’m a submissive, and have been a dominant. (Don’t know what those mean? Keep your virgin eyes and ears tuned in. And buckle up!)

Third, I actually read the book. (WARNING: anyone who enjoys even vaguely advanced fiction may find themselves atrociously underwhelmed. E.L. James is not the Shakespeare of our times, but she shared a fantasy that many women have entertained and our society greedily slurped it up in the sexual vacuum of female pleasure that is popular media.)

So yes, long before you take the dive of shame into the theater to discover what all the hoopla is about: know that this isn’t REALLY a pornographic, hot, steamy, kinky, freaky revelation masterpiece encapsulating some leather-bound depraved exploration of the human soul at midnight in the garden of imprisoned pussy. This is the mainstream equivalent of a 12-year-old boy and girl getting to first base while fooling around in the closet, and subsequently discovering some older teenager’s stash of porno mags… except instead of the magazines being ‘Playboy’, ‘Penthouse’ and ‘Hustler’, they are copies of ‘Bizarre’, ‘Skin Two’ or ‘Whiplash’.

With all of this in mind, I’d like to air out the unmentionables that some other reviewers might not have the courage to expose! {Speaking of unmentionables: they DO include the “panties scene”… but they don’t stay committed to the original version of the story, and it depressingly deflates one of the most potentially scorching sex scenes in the film. It’s like getting your ass whipped with spiderwebs, when you know your dominant has perfectly good nylon rope right beside your anxious body!}

The Good: FIVE GENTLE LASHES OF A VELVET FLOGGER ON YOUR UPPER BACK AND SHOULDERS, WITH WATERFALL SOFT FLOURISHES AND A TICKLE TWIST BACK UP YOUR RIBS AT THE END

~ Have you been to McDonald’s lately? You know how they are trying to go upscale and feed people things that actually are more healthy than simply mouth-injected, food-like substances? Well, ’50 Shades of Grey’ is like the McRib (which my mind told me was a disgusting, special treat… but I loved secretly like it was a BBQ-based fetish for my mouth) or the new culinary concoction they are serving: the C.B.O. (Chicken/Bacon/Onion burger).

It seems like it’s vaguely nutritious (you’re eating McChicken), it satisfies a particular animalistic craving (bacon eaters unite), and it comes in a specialized package that is not like the typical serving (on a soft onion-sprinkled square bun). Likewise, the movie satisfies the desire in all of us for a cheap, easy, thoughtless consumption of semi-digestible content for the nourishment of the deep, dark cravings we all keep hidden inside of us. It’s like we have to say “Don’t look at me!!” with our mouth stuffed full of ’50 Shades of Grey’ dialogue, secretly smirking when we see the “was THAT nice?” sex scene. Pure McBDSM.

~ As far as book adaptations go: ’50 Shades of Grey’ is satisfyingly aligned to the source material, and truly brings most of the ‘memorable’ moments of the book to life on the silver screen with acceptable accuracy. For better and for a lot worse, the director, Sam Taylor-Johnson, stayed stalker-close and BFF-faithful to the majority of the pages in the novel. From the first moment Anastasia and Christian meet (which is the first moment I rolled my eyes), it maintains an admirable respect for its original script, and does the best it can to satisfy the dark, secret, burning desires of women across the globe who fantasized about seeing their billionaire hunk whisk them away into a world of sweet, seductive pain and the comforts of control.

They are not -technically- responsible to portray any actual healthy, consensual relationships in this movie, as it’s fiction, and need not correspond to fact in any way. “Basic Instinct”, “9 1/2 Weeks”, “Boogie Nights”… none of these Hollywood movies were responsible for portraying reality-based relationships. ~ The sensual musical soundscape is decidedly decent… and actually, I think it’s more impressive and arousing than the visuals! -Yes, for me the sex scenes were that bland.

Excellent use of The Weeknd’s smouldering R&B seducer, “Earned It”, and Beyonce is immortalized in the flick with her Absinthe-heavy version of “Drunk in Love”. Screaming Jay Hawkins “I’ve Got A Spell on You” also earns a clever wink, but for the most part, Danny Elfman’s score simply highlighted the lack of passion-elevating moments from a story that is mainly about sex.

Let it be known: Christian Grey IS ABSOLUTELY NOT the typical male dom (as he exists in the book), and if he was, he would hopefully be quickly rounded up and thrown into jail for various criminal offences he perpetrates with the apparently impunity billionaires enjoy. But I won’t spoil the surprise! I will commend the movie for detailing the actual process that should be involved in creating a sub/dom relationship with charm and humor.

The Bad: SIX LASHES ACROSS THE ASS AND BACK OF THE UPPER THIGH WITH A WOODEN CROP WITH A WET LEATHER TONGUE AND NEAR TOTAL DISREGARD FOR YOUR PAIN THRESHOLD

~ Obnoxiously rich, tall, emotionally dark, and handsome bachelor with a mysterious, troubled background? Oy vay, can we come up with a more egregiously typical cliche for a romantic antagonist? No, we cannot. We simply cannot come up with a more typical powerful and attractive white male than Christian Grey, and the bland obviousness to so much of his identity serves to both strengthen the story by assumption, yet weaken it by expectation.

He has a helicopter, naturally, an Audi, among a fleet of other uber-expensive rides, and high-tech gadgetry that guarantees Anastasia’s privacy no longer competes with other items on Christian’s corporate to do list.  Then of course there is the opulent mansion-sized condo, complete with a shining black piano, where he flawlessly plays somber classical masterpieces by the moonlight.

~ Their first pseudo-semi-intimate moment, in the book, could NOT be more of a cliche than it actually is, and when I read it, I groaned in agony, then the cliche connection happened in the movie, and this time, the whole theater groaned along with me! Catharsis met schadenfreude on levels they had never known before, I swear to my own inner Goddess. There are more moments of utter and absolute incredulity that caused collective scorn and mild fury, but they actually exist less frequently in the movie than in the book.

~ Invasion of privacy much, Christian? Apparently, it’s a thing for you. And there are virtually no opportunities for the movie to explore, 50 shades of Christian’s supposedly mercurial, unpredictable and complex personality, as it is attempted to be presented in the book. The movie delivers two virtually basic caricatures and just crashes their emotions together in a semi-predictable path from sweet, sweet innocence to… the painful point of no return *cue telegraphed ominous music*

~ The movie removed some elements that could have contributed to vaguely necessary plot devices such as “character development”, “coherent plot sequencing” or “willing suspension of disbelief”. If you see it, you will understand. If you read the book, you will understand deeper just how bad some of the event sequencing and emotional evolution is. The dialogue is definitely cribbed from the novel directly in many of the scenes of conflict, and the faithfulness to the source material is both ’50 Shades of Grey’s saving grace, and the sealer of its doom, yet one can’t help but be stranded between “stay true to this McRib” or “create some new gourmet mouth fuck”?

When Christian quotes his brother Elliott with a famous line from the book, the vortex of groaning and grinning made the theater’s walls bend like a glitch in the Matrix, it was so simultaneously bad and “good”. There is no pleasure more guilty of tapping into some raw primal core than this book.

~ The sex scenes are ALL made of the most basic film school tricks of pretending ~actual~ sex is happening on screen. Big respect to Dakota Johnson for baring her breasts for a third of the movie, as that’s the MOST sexual occurrence in the entire experience. Nude nipples on naked breasts. Seriously.

The Ugly: FOUR FULL FORCE SPANKINGS WITH BOTH OF MY HANDS UPON YOUR SWELLING ASS-CHEEKS  BECAUSE I’M PALM-TWITCHINGLY MAD THAT THIS MOVIE IS THE CURRENT EPITOME OF POP CULTURE’S SEXUAL EXPLORATION

~ Rita Ora plays Christian Grey’s sister, and only gets about nine words in the movie. Someone should be whipped for throwing away such an opportunity!

~Two more sequels are already GUARANTEED to be made, and whipped across your eyeballs. Sorry, but there will be no escaping the Steele/Grey vice grip that is circling around our collective societal attention span. The cinematic versions of ’50 Shades Freed’ and ’50 Shades Darker’ will bombard our delicate senses in Valentine’s Day 2016 and 2017 and it’s a foregone conclusion beyond a shadow of a doubt, since ’50 Shades of Grey’ debuted with record-breaking numbers on opening weekend.

But if you DO have a side of you that loves to inflict pain, control pleasure, give orders, take punishment, give your body away, take someone’s body over, or explore some other aspect of intimate power sharing: then welcome to the end of the first dark fantasy, and the beginning of the rest of your wonderful sex life.

~ Let it be known: Christian’s reasons for becoming a dominant are the WORST IDEAS IMAGINABLE regarding reasons why a person might become a dom! UGH.

So, as it so happens when either domming or subbing… I’m tired. Now, our scene is done. Thank you, Ana. It’s time for some loving, soothing after-care and gentle kissing and caressing (WHICH IS MANDATORY TO DO AFTER EVERY SINGLE BDSM SCENE EVER DONE IN LIFE) and healing of your delightful-danger-damaged, satisfied sexual psyche. You have a full year to heal from ’50 Shades of Grey’, and even though it’s going to be damn near impossible to not get mesmerized by the hypnotic glare of Christian’s magnetic and possessive eyes… I want to take this moment to remind you that you ALWAYS have the power to say your safe word, and end the scene, anytime you want.

Being the power-bottom you are, I’m sure you will never forget that lesson, Anastasia.

B-B-BUT WAIT, IT GETS WORSE! THERE IS SO MUCH MORE TO BONDAGE, DOMINATION, SADISM AND MASOCHISM, DEAR READER!

A GOOD DOMINANT WOULD DEMAND YOU READ AT LEAST A FEW OF THESE BRILLIANT BOOKS, TO PROVE YOU ARE WORTHY OF RECEIVING THE BLISSFUL BLESSING IN THE PLEASURE OF THEIR LOVELY PAIN:

-The Master’s Manual by Jack Rinella

-The Loving Dominant by John Warren

-The Mistress Manual: The Good Girl’s Guide to Female Dominance by Mistress Lorelei

-When Someone You Love Is Kinky by Dossie Easton

-Becoming A Slave by Jack Rinella

-Wild Side Sex: The Book of Kink: Educational, Sensual, and Entertaining Essays by Midori

-The Sexually Dominant Woman: A Workbook For Nervous Beginners by Lady Green

-The Adult Spanking and Discipline Handbook: A Comprehensive Guide to Corporal Punishment by Governess Gemma Forbes

Play with fire and Love!