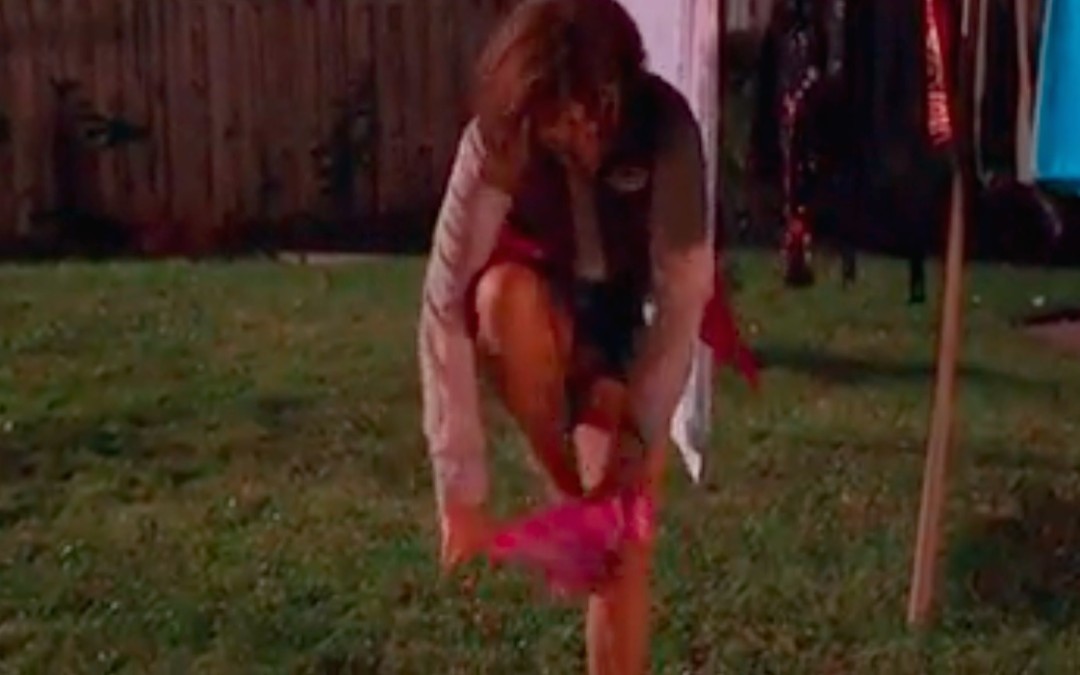 There’s an eternal struggle to be filthy in John Waters movies. Sometimes it’s forged by switchblade toting greasers who are up against a town of squares – or in the case of his first movie, it’s a three hundred pound drag queen competing with drug dealing sex-traffickers to reach the title of filthiest person alive. Among the things they do to contend are shit eating, cop killing, and selling heroin to elementary school students.

In A Dirty Shame, it’s the struggle is to discover a new sex act. The task shouldn’t be too hard because everybody in town is mysteriously turning into sex addicts – which is somehow linked to a large number of citizens hitting their heads and getting concussions. The town policeman cruises the quaint suburb in a diaper, living out his baby fetish. Three construction workers move in together as the “Three Bears”, a nymphomaniacal trio prone to sex in their backyard. Needless to say, the uptight citizens in town aren’t happy.

Sylvia heads off to work, only to be stopped in the middle of traffic when she runs out of gas. Brought out of her car by of all the honking, she bickers with drivers eager to get to where they’re going, presumably to get off. In all the commotion, she doesn’t see a side-view mirror of a large truck and conks her head.

But, as she soon learns, her new habit comes with responsibility, too. In a twist that scandalously mimics the bible, Ray Ray tells her that she’s the twelfth apostle, and she’s at the center of the search for a new sex act. But she’s up against a lot – Big Ethel, Sylvia’s mother, fronts a mission against sexual freedom in their community. Beyond that, there’s her husband, who wants her to seek counseling. Will she and her crew of fucksters find a new sex act or will they be stopped in their tracks by uptight townies?

Be warned, if you want to see actual sex, look elsewhere. John Waters is much more interested in capturing the search for a new sex act than actually showing penetration. It’s more about the raunch, the bad taste. It’s a celebration of all those urban legend sex acts you talked about under a tent in your parents’ backyard but would never dream of bringing up in the bedroom.

Like his characters, John Waters strives to conquer a new frontier of filth. He grew up in the midst of the exploitation scene and has carried its essence in his movies for past forty some years. And although A Dirty Shame has top notch production value, there’s still the feeling of a young contrarian lashing out against small town closed-mindedness. In a time when porn is accessible and nothing’s shocking, it’s important to remember times when sex was really taboo. That said, even in today’s landscape of sexualized media, John Waters movies stand out as especially colorful. It’s good to know that the man famous for bringing shit eating to the big screen kept his integrity – if that’s what you want to call it.